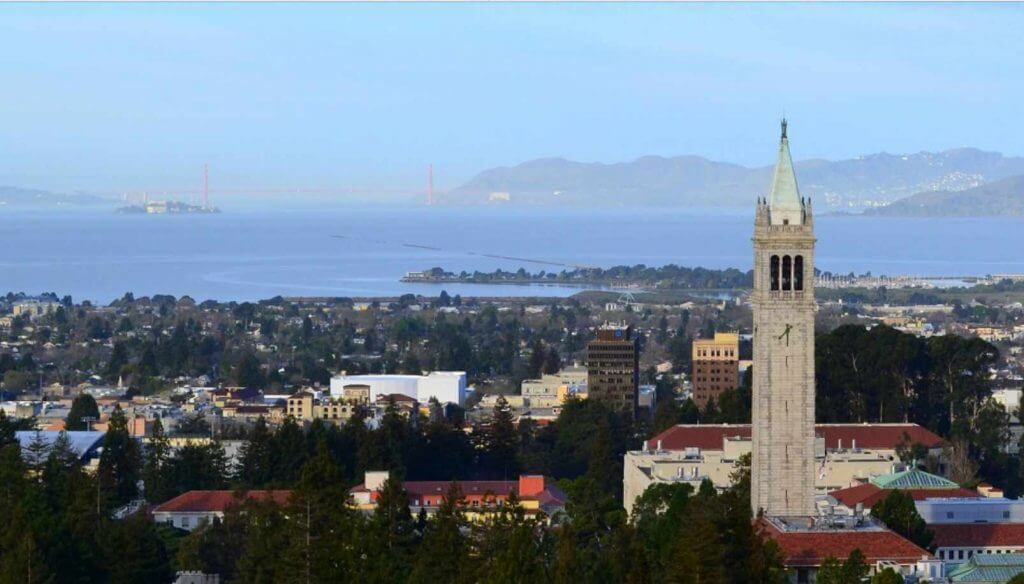 My visit to the University of Berkeley campus

In the summer of 2017 during my  vacation I had the opportunity to visit the university campus. In this article, I describe the main places visited and some information about the Business Analytics course I frequented after 4 years of my visit.

The University of Berkeley founded in 1868 is the oldest and main of the ten Universities of California. It faces the San Francisco Bay. With its 40,000 students, including undergraduates and doctoral students, Berkeley is one of the most famous and important universities for the sciences, according to Wikipedia it is the fourth in the world with 94 Nobel laureates.

Designed by the Scottish architect David Farquharson, the original campus involved the construction of six buildings that would house the various colleges. These buildings would be clustered around a central library building designated as the Hall of California. The new campus took shape with the construction of the College of Letters and the College of Agriculture, known as North and South Halls respectively. There are also 32 libraries across the university, together making up the fourth largest academic library in the United States, with 11 million volumes.

South Hall was completed in 1873 and is the oldest building on campus, the only remaining building from the original university core. The importance of the building lies in its European architectural style which was widely used in the country in the second half of the 19th century.

Today the historic South Hall is home to the recent School of Information and is located in the heart of the campus, near the Doe Library and the Campanile (Sather Tower). The building is considered a public place and it is possible to visit it freely.

I went in and walked through the wide corridors. The atmosphere that reigns encourages concentration. Photographs of the people who have contributed to the development of important projects are displayed on the walls.

Near the entrance there is also a small bar where you can buy delicious coffee cakes. In figure 2 the entrance door.

The Sather Tower is an on-campus bell tower named after banker and philanthropist Peder Sather. Also known as The Campanile due to its resemblance to the Venetian bell tower of San Marco it was designed by architect John Galen Howard with neo-Gothic architecture and is a famous landmark of Berkeley. It was built in 1914 and inaugurated three years later, becoming the third tallest bell tower in the world with its 94 m height. In figure 3 the tower taken in front of the South Hall entrance.

Inside the bell tower there is an elevator that taking you to climb up to the eighth floor where you can enjoy a truly unique view over the entire San Francisco Bay (see the initial image of this article).

The Sather Gate was used to mark the formal south entrance to the campus. It is close to the Upper Sproul Plaza often revived during the student protests of the 1960s. In fact, the Free Speech Movement was born on this campus under the informal guidance of some student leaders, including the Italian Mario Savio in the academic year 1964-1965. Even today it remains a very popular place to make leaflets.

At the top of the gate are eight panels of bas-relief figures, with four naked men representing the disciplines of law, literature, medicine and mining and four naked women representing agriculture, architecture, art and electricity. When the panels were first installed, public outrage led Sather to demand their removal; 67 years later, the figures were rediscovered and reinstalled.

Today, 4 years after my visit to the Berkeley university campus, the dream of attending a course at this prestigious university comes true. In fact, the natural evolution of Data Analytics activities carried out in recent years has led me to want to deepen the use of AI (Artificial Intelligence) and ML (Machine Learning) for some Business Analytics activities.

To be updated on these issues by qualified and industry-leading faculty, I enrolled in the Business Analytics for Leaders – From Data to Decisions course at the Berkeley Haas School of Business. If you need more informations click on this link.

Why understanding your data helps improve your business.